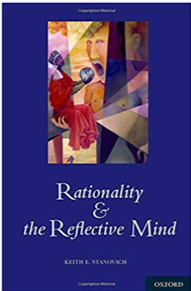 In Rationality and the Reflective Mind, Keith Stanovich attempts to resolve the Great Rationality Debate in cognitive science–the debate about how much irrationality to ascribe to human cognition. He shows how the insights of dual-process theory and evolutionary psychology can be combined to explain why humans are sometimes irrational even though they possess remarkably adaptive cognitive machinery. Stanovich argues that to fully characterize differences in rational thinking, we need to replace dual-process theories with tripartite models of cognition.

Using a unique individual differences approach, he shows that the traditional second system (System 2) of dual-process theory must be further divided into the reflective mind and the algorithmic mind. Distinguishing them will allow us to better appreciate the significant differences in their key functions: The key function of the reflective mind is to detect the need to interrupt autonomous processing and to begin simulation activities, whereas that of the algorithmic mind is to sustain the processing of decoupled secondary representations in cognitive simulation.

Stanovich then uses this algorithmic/reflective distinction to develop a taxonomy of cognitive errors made on tasks in the heuristics and biases literature. He presents the empirical data to show that the tendency to make these thinking errors is not highly related to intelligence. Using his tripartite model of cognition, Stanovich shows how, when both are properly defined, rationality is a more encompassing construct than intelligence, and that IQ tests fail to assess individual differences in rational thought. He then goes on to discuss the types of thinking processes that would be measured if rational thinking were to be assessed as IQ has been.