Do Prescriptions Work Better Than Proscriptions? 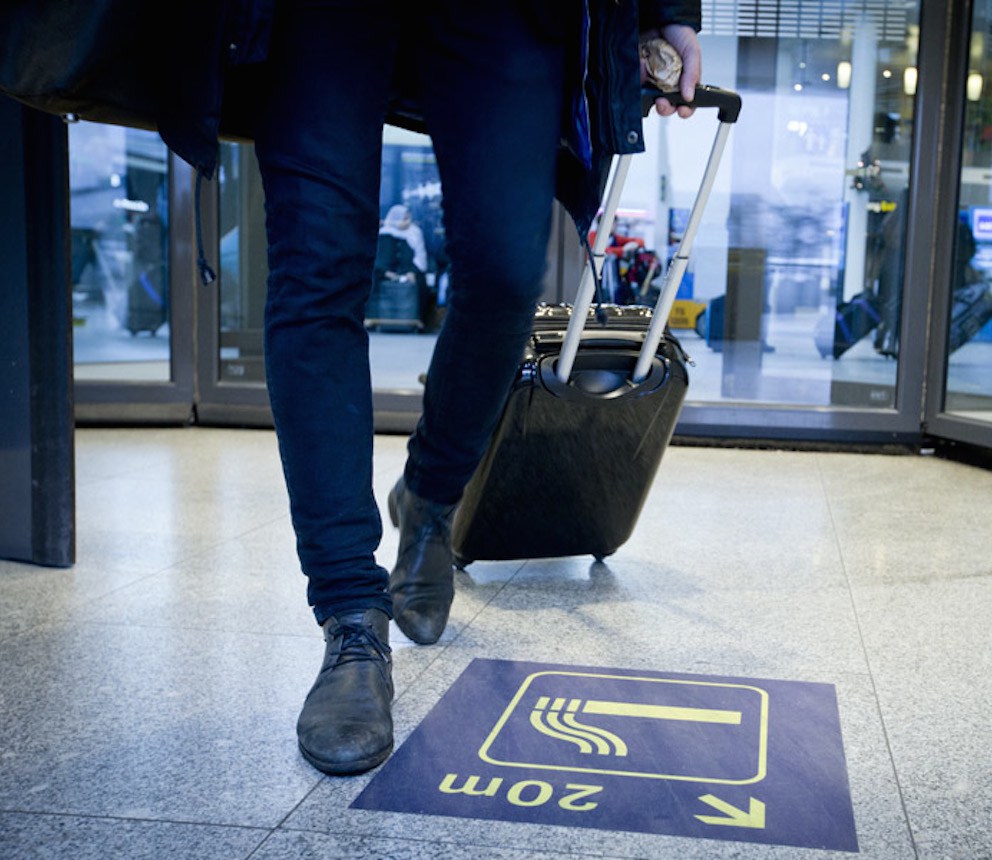 As in many other countries around the world Denmark a few years ago (2007) banned indoor smoking from workplaces, restaurants and other contexts potentially exposing others to second hand smoking. While the law has been a huge success in changing smokers’ behavior, it has also created the well-known phenomenon of smokers piling up outside the doors of public buildings, pubs, and offices. Though more considerate than smoking indoor, this behavior pattern poses a pinheaded risk for those working next to door areas. Receptionists and office workers sit hours just inside open doors, next to windows or air-conditioning circulating air from these areas.

With more than 23.000.000 travellers a year and 25% of these being smokers, Copenhagen Airport has seen its fair share of the problem. To solve it the airport initially established strict no-smoking zones just outside the doors and other selected areas. Yet, to the despair of the airport officials smokers didn’t seem to care much about the proscription to light up their cigarettes in these zones. Not wanting to escalate into issuing fines to their visitors, they challenged our team to come up with a nudge that would change smokers’ behavior so as to reduce risk factors from second hand smoking.

Going Undercover In The Airport

To meet the challenge, team-members of iNudgeyou dressed as ordinary travellers went into the field-setting to observe and map the behavior of 1.323 smokers outside the airport through a process beginning with non-structured moving over to semi-structured to end up as fully structured observation sets. This part of applied behavioral science labeled as behavioral reduction and diagnosis is a prerequisite of any successful interventions, but rarely mentioned leading people to think that ideas for how to “nudge” just pops into the head.

Just an ordinary day at “the office” in Copenhagen Airport for the iNudgeyou team.

During this process different behavior patterns where identified and observed, and correlations and hypotheses tested through data collection. The insights resulting from this work confirmed some of our initial hypotheses.

We also observed and mapped the particular behavior and attention patterns of smokers, such as where they announce to fellow travellers that they’ll go outside to smoke, when they put their cigarettes in their mouth (when passing through the rotating doors), and what kind of objects captures their attention and triggers movement while smoking (e.g. benches, other smokers, sunbeams). 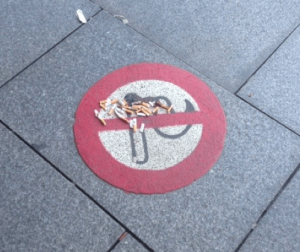 Psychologically “not-to-do” is not the same as “what to do”.

Mapping possible solutions to our diagnosis based on behavioral reductions we ultimately opted for nudging smokers’ behavior by turning the standard regulation based on proscription up side down.

To see why, first notice that proscription as found in the no-smoking zone is merely the inverse of an prescription to smoke elsewhere. That is, they are identical frames and hence should make no difference for a hyper-rational agent.

However, from a psychological point of view, prescriptions are what we call “action directing” (do this), while proscription are not (do not do this). In particular, in the case of nudging smoking behavior in the airport we hypothesized that prescriptions would be particularly effective since it could be made to underpin the central action (different from peripheral actions) carried out by smokers.

The Three Layers Of Intervention

Ultimately the intervention came to consist of three layers, or three nudges if you like, aimed at the dominant behavior pattern – i.e. smokers coming from inside the building.

The three nudges were:

Intuitive coding. In order to prepare smokers to look for where to smoke upon leaving the building, stickers showing an icon of a lit cigarette plus a number of meters were put on the floor inside the airport in those areas where smokers were observed to initiate their smoking behavior by walking towards the door and reaching into their pockets for their cigarettes. 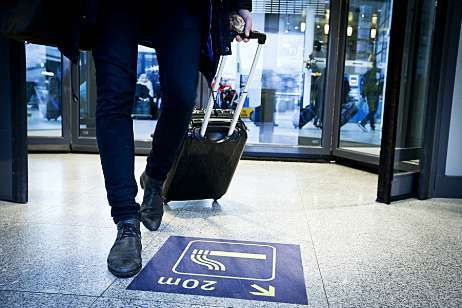 Re-arrangement of environmental affordances. An affordance is a property of an object, which suggests an individual to perform a certain action (e.g. a chair suggests ‘sitting down’ and a teapot suggests the act of ‘pouring’). The series of observed environmental affordances influencing smoking behavior that could be re-arranged was re-arranged. Benches and litterbins (some of which featured ashtrays) were moved outside the non-smoking zones.

Publicly salient (spotlight effect) prescriptions. Finally, we introduced publicly salient prescriptions by constructing suggested smoking zones a safe distance from open areas and air-condition intakes. These zones consisted of square zones marked by yellow gaffer tape, cigarette icons to serve as success-feedback in the suggested smoking routine, as well as yellow cylindrical ashtrays. We have prior experience using salient features like these in public places to trigger the so-called spotlight effect – which causes people to have a tendency to overestimate the extent to which surrounding others notice aspects of one’s appearance or behavior, and the extent to which they are aware of it – which in turn reinforce existing social expectations and norms. 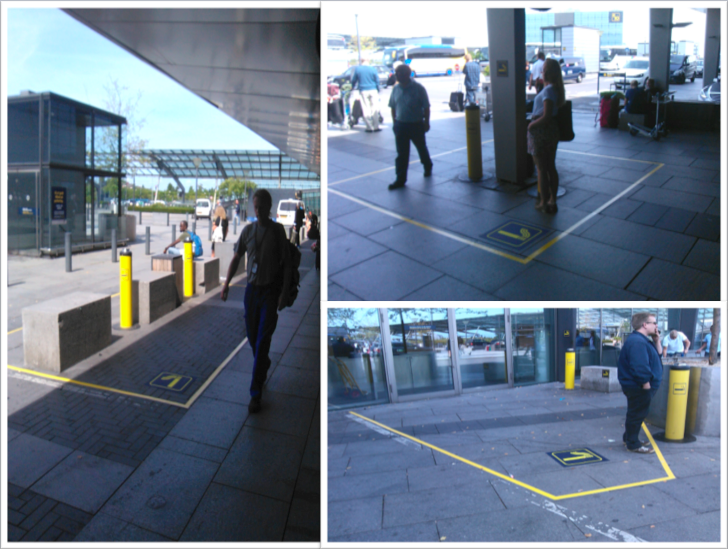 After three months of observations, analysis, diagnosis and preparation the three layered nudge-intervention was implemented in selected areas at Copenhagen Airport. The result comparing the baseline behavior of 1.695 smokers with that of the intervention behavior of 1.489 smokers speaks for itself. Smoking in the non-smoking areas had decreased from 56,28 % of the smokers transgressing the ban before to 26,46 % after the intervention was introduced – that’s more than a 50% reduction in inconsiderate smoking. 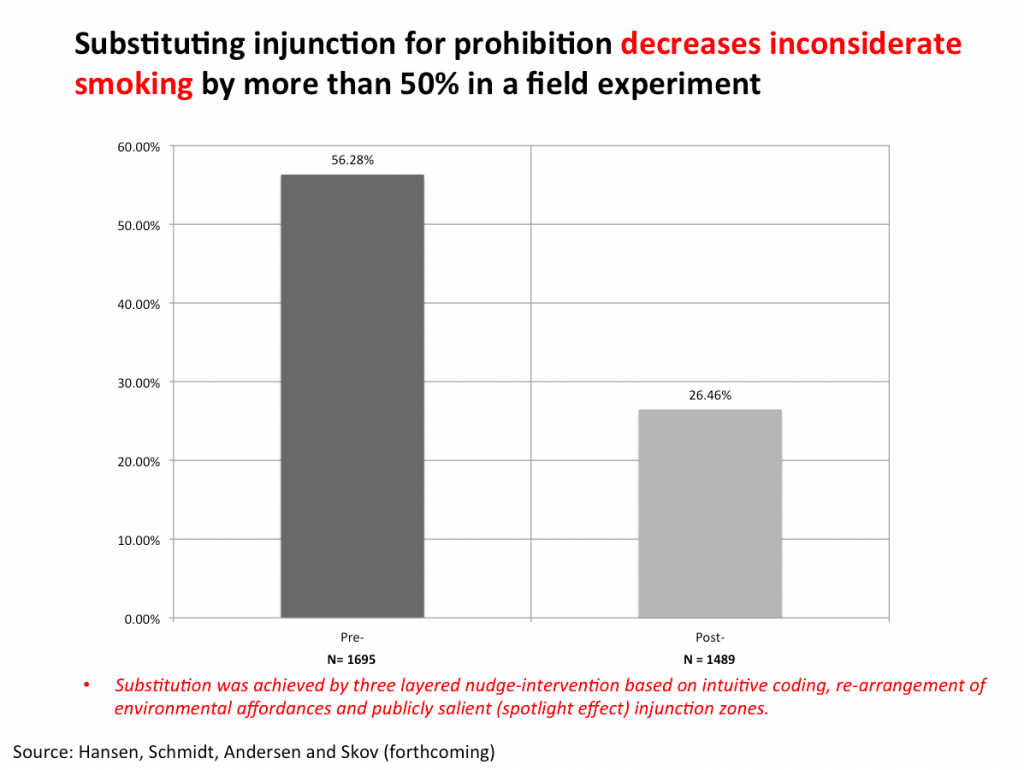 Considering the mechanism design and result there is no reason why this intervention cannot be implemented in many other public settings where the problem exists, such as hospitals, train stations, town halls, etc.

This beautiful result is one thing. Another is the reception by travelling smokers puffing in the airport. How do they react to the nudge?

As reported in the national evening news on Danish television (13:32), smokers are generally very very positive about the intervention: 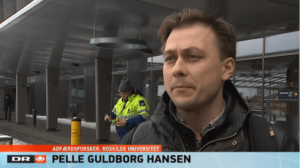 “Now it is actually accepted that there are some smokers who can get their own area to be in without people having to complain about it”, says student and smoker Lærke Wohlfahrt

“Of course it is nice that there is a clear and obvious zone saying that here you can smoke”, says Michael Jensen a technical director.

Besides the effect and the positive reception by the smokers in Copenhagen Airport, the intervention also had an unsuspected positive side effect. This effect was noticed when collecting post-intervention data where remaining smokers in the non-smoking zone were observed to walk up to 10 meters to dispose their cigarette butt in the yellow ashtrays in the smoking zones.