The Piano Stairs – Short Run Fun And Not A Nudge! 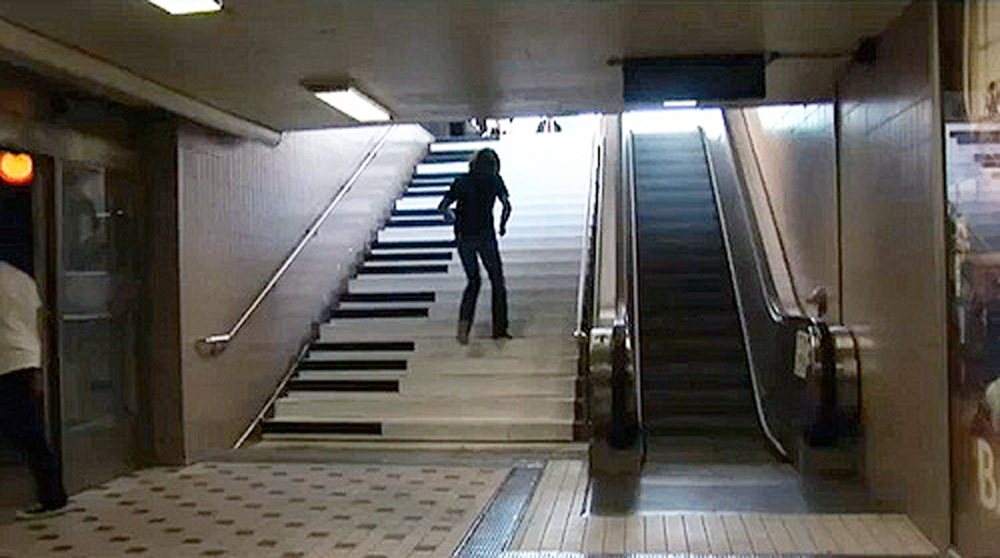 Have you ever heard about the piano stairs made famous by Fun Theory? Sure, you have.

At least, when I give talks on the Nudge doctrine everybody seems to know the piano stairs. The YouTube video has apparently spread like a wildfire throughout the world. Watched by millions of tired office workers in search of 15 seconds of fun while tied to their desks; spread by collegial nudges penetrating the walls of the cubicles – “Hey take a look at this!”

But does it really work? And what about the claim that seems to be almost as widespread as the video: the belief amongst many public decision-makers and practitioners that Nudge and FunTheory are basically the same – is that claim true?

Is It A Nudge?

Let’s begin with the latter question – are the piano stairs a nudge?

Now, just to emphasize: to my knowledge Fun Theory hasn’t claimed to be part of the nudge doctrine. Instead the programmatic declaration about Fun Theory on TheFunTheory.com says:

“This site is dedicated to the thought that something as simple as fun is the easiest way to change people’s behaviour for the better. Be it for yourself, for the environment, or for something entirely different, the only thing that matters is that it’s change for the better.”

This makes Fun Theory both sympathetic and novel. But it doesn’t make it a nudge. Still, many people believes so, and I’ve even had a few people from public policy making cancel presentations when they learn that nudging isn’t fun – at least, not by definition.

Instead, what do follow by definition is that FunTheory isn’t nudging. Now, as described in an another entry something is not a nudge if it works by changing incentives – not only in terms of economic, but also social, time, etc. One test of whether a nudge works independently of incentives is to consider whether an un-boundedly rational agent would change his choice or behavior given the intervention. If he would, it’s not a nudge.

However, it seems obvious that even an un-boundedly rational agent would change his behavior when faced with a fun-intervention as the piano-staircase. Making things fun is a way of changing the incentives and no one says – not even neo-classical economics – that rational agents are not allowed to have fun. Thus, it may be concluded that the piano staircase isn’t a nudge.

Still, the widespread belief that the piano staircase is nudging shouldn’t be attributed to ignorance. The mistake most likely originates with the original, but too wide definition of a nudge given by Thaler and Sunstein themselves in Nudge (see Thaler & Sunstein 2008:6) – a definition that only bars influencing behavior with economic incentives. However, Hausman and Welch have argued convincingly in Debate: To nudge or not to nudge (2010) that a viable definition has to bar other non-economic incentives as well.

But Does It Work?

Well, that’s obviously an empirical question. But two skeptical observations (at least!) may be noted about this even before you walk off to your local metro-station to put up the stairs.

First: what is your evidence? If you look at the piano staircase video it turns out that the evidence is really bad. How many people were observed? How were the days for observation chosen? “66% more people than normal chose the stairs over the escalator” doesn’t really tell you much. These are just some of the standard questions you would ask as a social scientist before taking something like piano staircase seriously.

Second: is the intervention of the piano staircase sustainable? That is, if it really does change behavior (as I think it does), then does it change behavior for more than a day or two? And is the effect as intended?

Again that’s an empirical question. But again it may pay off to do some thinking before bothering to set up a test. So think of this:

It’s Monday morning and you’re on your way to work. Arriving at the metro station you see the stairs. That seem like great fun and you decide to try them out. You do this for a couple of days, but Thursday morning you decide to take the escalator. The piano stairs doesn’t seem that fun anymore. That’s fine. This only seems to affect you, and not new comers – or does it?

When shooting commercials you sometimes get a lucky shot where even the tired and old opt for your cure. This man may be the last one on the stairs though.

Friday morning you start to grow increasingly annoyed about the stairs. Tourists and kids are playing on them and making a lot of unwelcome noise. You would really prefer that they stopped. Monday you no longer prefer them to stop – you prefer that they went to hell; and so does every other regular traveler. You hate the piano stairs and together with everyone else you start to send clear signals to those thinking about using the stairs that they should really think twice. It becomes common knowledge to everyone travelling and who’s not a tourist that only an idiot would take the stairs. Ultimately, even those who preferred the stairs to begin with, end up taking the escalator!

So fun may really change behavior – and in the case of the piano stairs, it seems obvious that it may even change it to the worse.