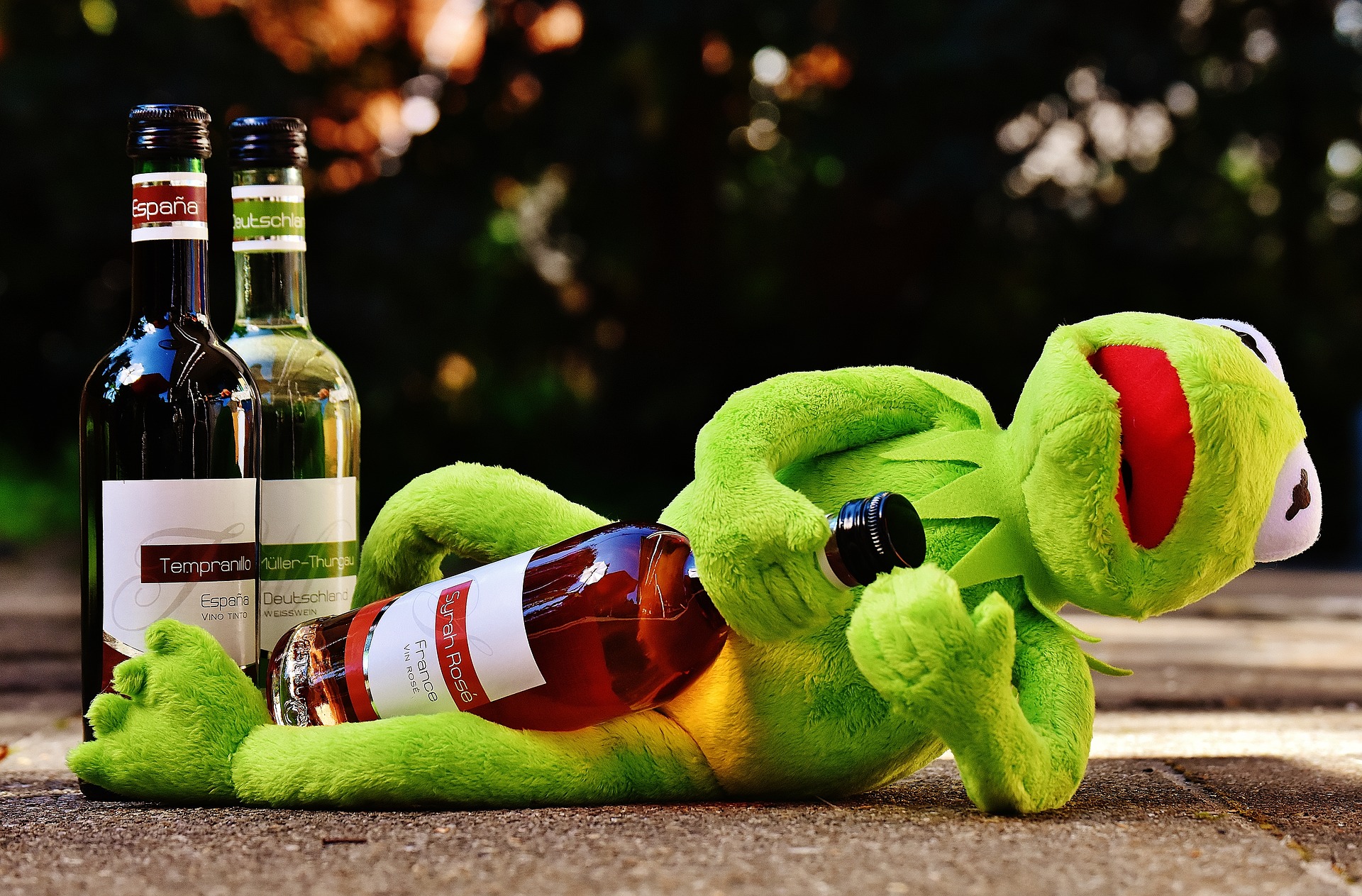 Young people’s excessive consumption of alcohol is an issue frequently debated in many societies. The Danish Health Authority recommends that women drink less than 7 units a week and men drink less than 14 units a week. But do young people even know what a unit is? And are they influenced by the anchoring effect when it comes to alcohol? We decided to test this on 173 economics students at the University of Copenhagen.

What is the anchoring effect?

Anchoring is a concept within behavioural science, describing the tendency to anchor a given piece of information, right before making a decision. Once an anchor has been introduced, subsequent tasks can be influenced by this anchor. Anchors usually consist of a numerical value and can lead to less optimal decisions or judgements.

Kahneman and Tversky’s wheel of fortune experiment in 1974

The psychologists Daniel Kahneman and Amos Tversky identified the anchoring effect in a well-known study from 1974 [1]. In the study, they asked a group of students to spin a wheel of fortune (with numbers ranging from 0 to 100) and to write down the number it landed on.  The experimenters had rigged the wheel to always land on either 65 or 10. Afterwards the students were asked to answer whether they thought that the percentage of African member states in the United Nations was higher or lower than the number that they just had written down. Finally, they were asked to estimate what they thought was the actual percentage of African countries in the UN. The experiment showed that the students who had been presented to the high anchor (65) on average estimated the percentage to be higher than those who had been presented to the low anchor (10). 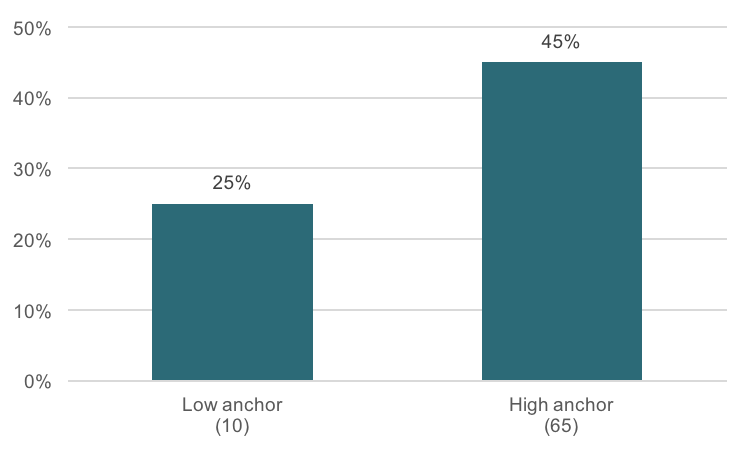 Spinning the wheel of fortune and estimating the percentage of African member states in the UN are two separate tasks, but the first task seems to affect the following one. This is precisely what Kahneman and Tversky defined as the anchoring effect.

The anchoring effect and uncertainty

It is important to notice that the anchoring effect is caused by uncertainty. If the experimenters in the study from 1974 had asked the students to write down their age (instead of the percentage of African member states in the UN), the anchor from the wheel of fortune (65 or 10), would not have affected their answers. Hence, there should be a certain degree of uncertainty associated with the question to be considered, for people to be affected by the anchor. The higher level of uncertainty, the higher is the probability of being influenced by an anchor.

These guidelines must necessarily be based on an underlying assumption that the population at least knows what a unit* is, regardless whether they choose to follow these recommendations or not. For this reason, we decided to investigate if university students know how many units there are in different types of alcohol beverages, and if they could be influenced by the anchoring effect.

During the summer, many university students spend a large part of their holidays taking summer courses. We therefore got the opportunity to get access to 173 economics students enrolled in a summer course at the University of Copenhagen. The students were randomly given two different questionnaires at a lecture. The two questionnaires consisted of questions about the number of units in three different alcoholic beverages (beer, red wine and vodka). The questionnaires were identical beside one thing: one questionnaire had a low anchor and the other one had a high anchor. The students were first presented to an anchor (either low or high) and afterwards they had to make a guess on the number of units in the alcoholic beverages.  Finally, they had to indicate how certain they were about that their guesses were correct (on a scale from 0 to 100 %).

Figure 2: Illustration of the two questionnaires 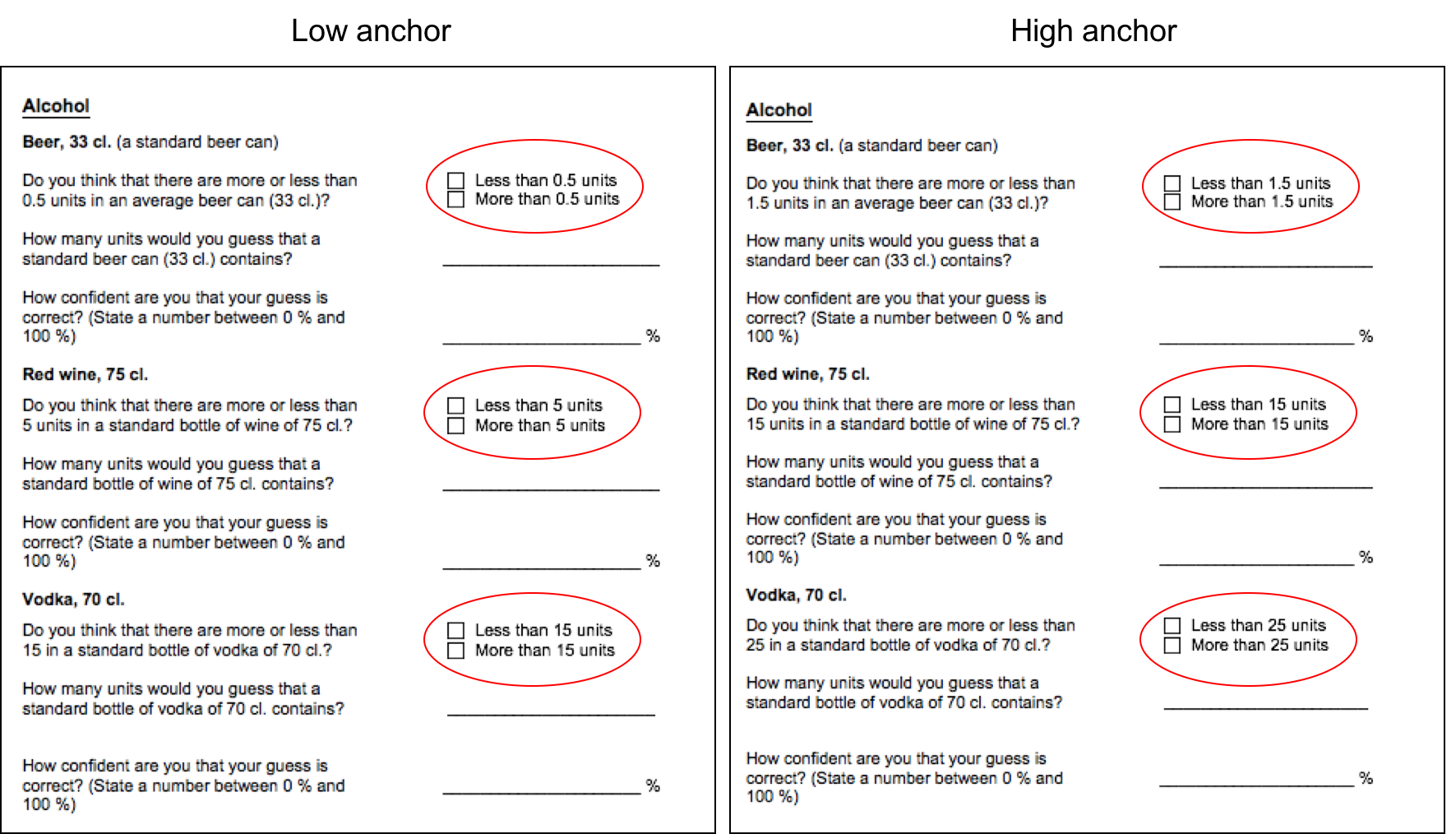 Figure 3: Average guess of the number of units in different alcoholic beverages 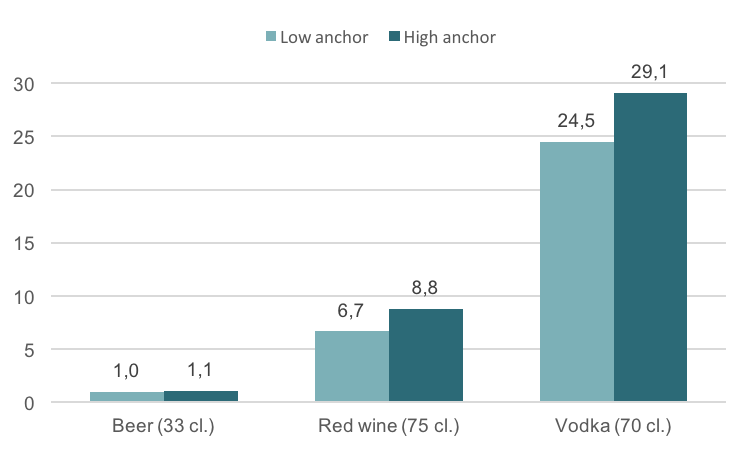 When looking at how certain the students have indicated they were on their guesses (on a scale from 0 to 100 %), we see something interesting. Looking at their guesses on the number of units in a beer can there is an average level of certainty of 74 %, for red wine 54 % and for vodka only 48 %. Thus, there is a relation between the degree of uncertainty and the possibility of being affected by an anchor. The more uncertainty, the greater the effect of the anchor.

Figure 4: Average degree of certainty of the number of units 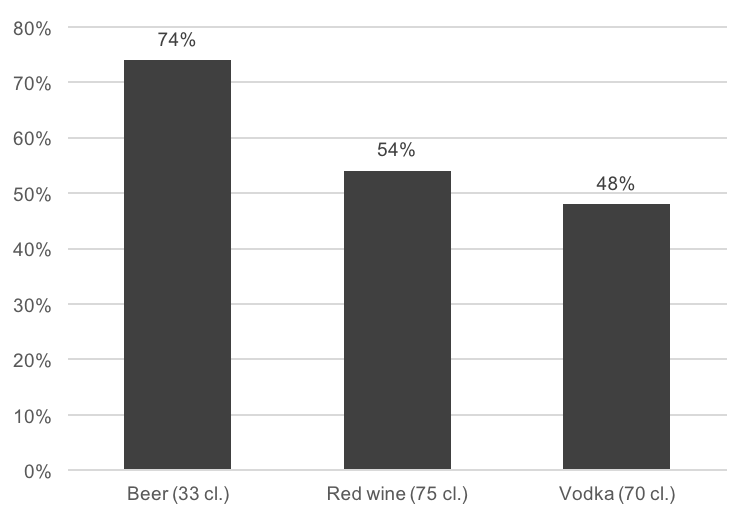 The result of the experiment demonstrates that the students are not confident about what a unit is: the anchoring effect appears for both red wine and vodka, and the students state that they are relatively uncertain about their guesses.

A widespread explanation for young people’s high alcohol consumption is misconceptions about other people’s alcohol consumption. Several studies have shown that young people think that their friends drink significantly more than themselves. This is problematic and could further increase the consumption, since the majority believes that the norm is to drink more than what themselves are doing at the moment [2]. To investigate if the 173 economic students also had these misconceptions about alcohol habits, we asked them to indicate how many units they are drinking on average per week and then how many units they believe their friends are drinking on average per week. Not surprisingly, the result showed that the 173 students indicated that their fellow students drank on average almost four more units every week, compared with their own alcohol consumption (p<0.001). 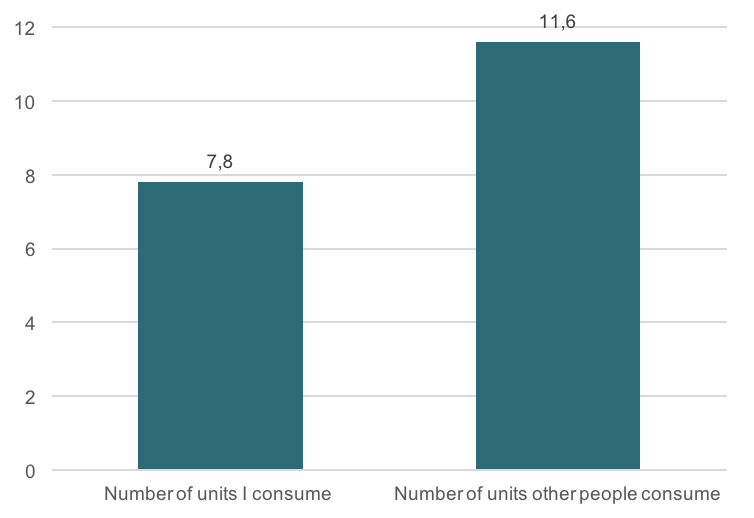 Anchoring, misconceptions about alcohol consumption – so what?

The experiment shows that the students are uncertain about the number of units in alcoholic beverages and therefore they are being influenced by the anchoring effect. Furthermore, we see a clear tendency of misconception about alcohol consumption, where students think that their fellow students drink significantly more than they do themselves. A question one could ask, is whether the Danish Health Authority’s recommendations of the number of units you should drink per week, is the best way to go if we want young people to drink less. It seems that other methods are needed if we really want to deal with young people’s alcohol habits. A better understanding of the behavioural problem, which we have explored in this experiment, is the first step towards a successful behaviour change and nudging. In other words, we must first have a clear understanding of the problem, before trying to solve it.

We are currently working on how to limit young people’s alcohol consumption with help from nudging – without ruin the good party mood. If you want to read more about alcohol consumption among young people, sign up for our newsletter. We will in the nearest future publish blogposts with the results from field experiments further investigating this topic.

*One unit is in Denmark defined as the amount of alcohol in a common Danish beer, namely 12 grams of pure alcohol.