Nudge Theory 2: Your Mind On Autopilot 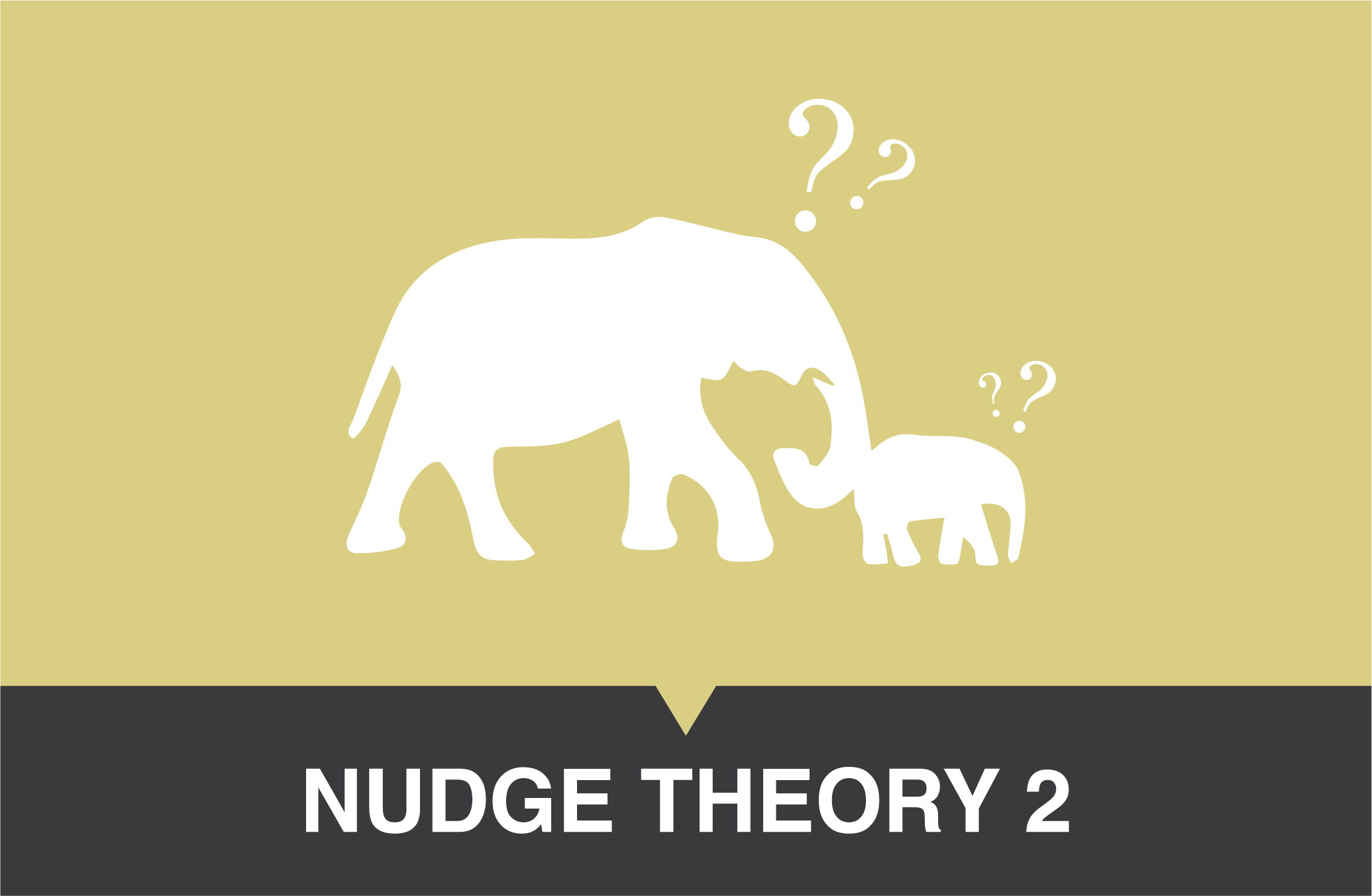 In our last Nudge Theory blog-post we gave a brief introduction to the mechanics of the brain and concluded that decisions should be roughly understood as the products of two very different interacting systems.

In this entry we’ll zoom in a bit and take you along for a short tour around the automatic system. We want to show you how it works, how it can work for us, rather than against us, and leave you with a healthy dose of appreciation for your very own autopilot. 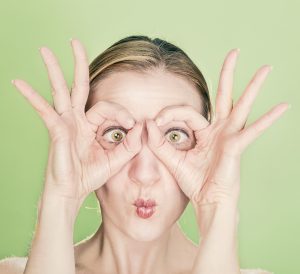 Did you look up?

Most people do when they are told, but we rarely look up unless we’re prompted to do so. Actually, we rarely think about where to look at all. Unless we’re spending our holidays in a foreign country, or walking home at night through a gloomy forest, orientation is pretty automated for us.

There are plenty of evolutionary reasons for the fact that we are more prone to gaze left, right, and straight ahead than we are to gaze up. After all, lions don’t have wings, and birds are seldom dangerous. And not much has changed in today’s high tech world, except that horizontal threats now move at 60 mph, consisting of steel rather than fur, and vertical threats are still somewhat limited by gravity.

Admittedly, I don’t know the exact ratio for accidents caused by either type, so I could be wrong. Let’s say I looked into it and found that, in my part of town, roofing tiles were somehow far more deadly than traffic was. Then I would do well to adjust my daily “looking around” with some more “looking up.” The execution of both actions would, eventually, correlate with the risk of getting hit/eaten/seen from the ground or sky, should lions ever take flight.

Putting your autopilot in the drivers seat

If the above scenario sounds somewhat extreme to you, don’t worry – after all, no  one really consciously determines the exact amount of times to look here or there. This simply means that you have an automatic system that functions well within its parameters.

The automatic system isn’t exactly a system – rather, it’s a series of processes with a set of common features – but nevertheless, it’s what keeps us alive and well in a world where thousands of inputs are evaluated and synthesized in a matter of seconds. It works by constantly scanning our surroundings, looking for anomalies, forming responses to familiar problems, executing pre-planned scripts, and creating linearity.

When we encounter something odd and potentially dangerous, the automatic system singles it out and assesses the situation. That may sound rather ominous, but not every anomaly represents danger. The automatic system often reacts to telltale “threats” that aren’t there anymore, but have been with us for so long that they’re now coded into our genetic make-up. This is why you often see a stop sign in red, but rarely one in green.

But anomalies are not just a matter of evolution, survival, and danger. We constantly draw mental maps of our surroundings and check these inputs against those we’ve experienced in a similar context. You may notice this from situations where you suddenly felt that something wasn’t quite right, but you could never pinpoint what that was. Perhaps your best friend’s apartment felt a bit smaller than normal, or a car in the opposite lane gave off a bad vibe. Here, your automatic system spotted a deviation from the unconsciously formed map of a particular context and was trying to alert you to it.

Besides making sure that everything is as it should be (or, as you expect it to be), your automatic system also calculates responses to the daily decisions that your reflective system simply cannot be bothered with.

To get a better grasp of this response formation mechanism, consider the tapestry of habitual acts that underlie the structure of everyday life. Do you know, for example, the amount of strokes you make while brushing your teeth? Or how often do you consider which route to take to work? At some point in your life these acts required consideration, but by now, you simply think “brush teeth,” or “go to work,” and let your automatic system take care of the rest, leaving you time to think about more pressing matters.

But the automatic system doesn’t just look after our habitual acts. Even in situations in which you believe you have total control, you’re often being guided by an initial automatic response with considerable impact on your final, conscious response. When you meet someone for the first time (or for the 100th time), your automatic system will prime an opinion based on simple parallel evaluations of that person, relative to how well they fit a crude stereotype. These responses are very crude in the sense that someone might appear to be “likeable,” “trustworthy,” “suspicious,” and so on. First impressions like this aren’t exactly accurate, but they carry considerable and often lasting weight in our interactions with people (or animals for that sake – especially dogs).

We all know about the power of first impressions, but these extend further than you might imagine. Consider the following basic math problem:

The bat cost 1€ more than the ball.

How much does the ball cost?

If your initial response was 0.10€, don’t feel bad – it’s simply your automatic system reacting to the symmetry of 1€ + 0.10€ = 1.10€, just like it instinctively reacts to certain (and often inaccurate) telltale signs the first time we meet someone (or simply pass them on the street).

Besides scanning your surroundings and making you fail math tests, your automatic system also keeps things in order. This is a somewhat abstract concept, but think of it as a system that projects a certain structure on a world full of randomness.

Our automatic ordering principle is rather straightforward. It simply designates a certain weight to everything we observe and then leaves everything else out of the equation. This is partly why causality is such a tricky concept and why we often have horrible intuitions when it comes to statistics.

To illustrate our need for linearity and order, take a look at this short clip made by psychologists Fritz Heider and Mary-Ann Simmel back in 1944.

Quite the story, right? A big angry triangle living in a house, bullying two friends, “Circle” and “Triangle Jr.,” and then chasing them away until finally breaking through the wall of the house in fury.

Well, not really. In the real world triangles don’t get angry, no one lives in a square, and geometrical objects certainly can’t be friends, let alone feel fear. The “story” you see in the short clip is imposed on the moving objects by your automatic system. This is a prime example of its constant need to make sense of the world, no matter how silly the narrative looks when viewed objectively.

This is just a sample of the mechanics, quirks, and facets of the automatic system that we all rely on. It’s important to note that this system is crucial to our survival, and we tend to underestimate just how much work it does for us every single day.

Still, the automatic system is an evolutionary product from a simpler age. Today, in an increasingly complex world, it often leads you into predictable miscalculations and unhealthy behaviors. Lets look at a few of them and see if we can find ways to create countermeasures, improving our decisions.

Crude as it is, your automatic system reacts exceptionally well to sensible information, but still has a difficult time factoring in all that you can’t hear, see, or feel. Indeed, many of the dangers that you’re faced with today won’t give you any immediate negative feedback, but they can be deadly over a long period of time.

Obesity, smoking, physical inactivity, poor dental hygiene, and failing to save for retirement are all distant consequences caused by a multitude of actions with immediate positive feedback. From a behavioral perspective, this combination is somewhat of an unholy union, and it is at the core of most of the personal and collective struggles that will define this century. Usually governments try to create countermeasures by asking your reflective system to suppress your automatic acts (we will get back to this mechanism in the next blog entry). Failing that – and it fails a lot – they outlaw some of the worst habits and tax the rest in an attempt to artificially create some immediate negative feedback in relation to the act.

We won’t get into the many, many problems that these traditional regulatory tools cause now, but suffice it to say that they aren’t optimal. Instead, you should start by accepting that you cannot exert conscious control all the time. Suppressing habits by will alone is very hard work. We can often gain better results by
understanding our automatic actions and changing the contexts in which they occur.

A lot of the nudges we deal with on this blog do just that.

Take the speed feedback signs, for instance. Here we have a nudge that works by predicting how your automatic system is handling the control of the speed while you’re driving. Since we humans aren’t equipped with a sense of speed that can meaningfully distinguish between 110km/h and 125km/h, we often end up breaking the speed limit without thinking about it. We don’t even realize the potential danger. A feedback sign, however, will flash your speed at you, creating a signal that’s not easily ignored; when you recognize that you’re speeding, you become cognizant of your own culpability. This is often all it takes to make us slow down.

In a similar way, many of the various food nudges described on the blog work by exploiting your existing habits or reactions. Wansink’s experiments with reducing the size of your plate have shown us that your automatic system just loads up the plate with food until it seems somewhat full. It doesn’t think too much about the total amount of food that’s actually on the plate (not to mention how much food you’ll actually be able to eat). And instead of making every meal a fight between your automatic and reflective systems, you can solve the problem simply by reducing plate size.

Know thy (automatic) self

Feedback signs and food plates are just a small fraction of the ways you can manipulate your automatic responses, impressions, and predictions. But before you can do this, you need to know and recognize your own automatic system at work. Getting familiar with your own habits and other automatic responses is the first step towards getting them to work for you instead of against you.

* The answer to the math problem

Featured image by courtesy of: freedigitalphotos.net