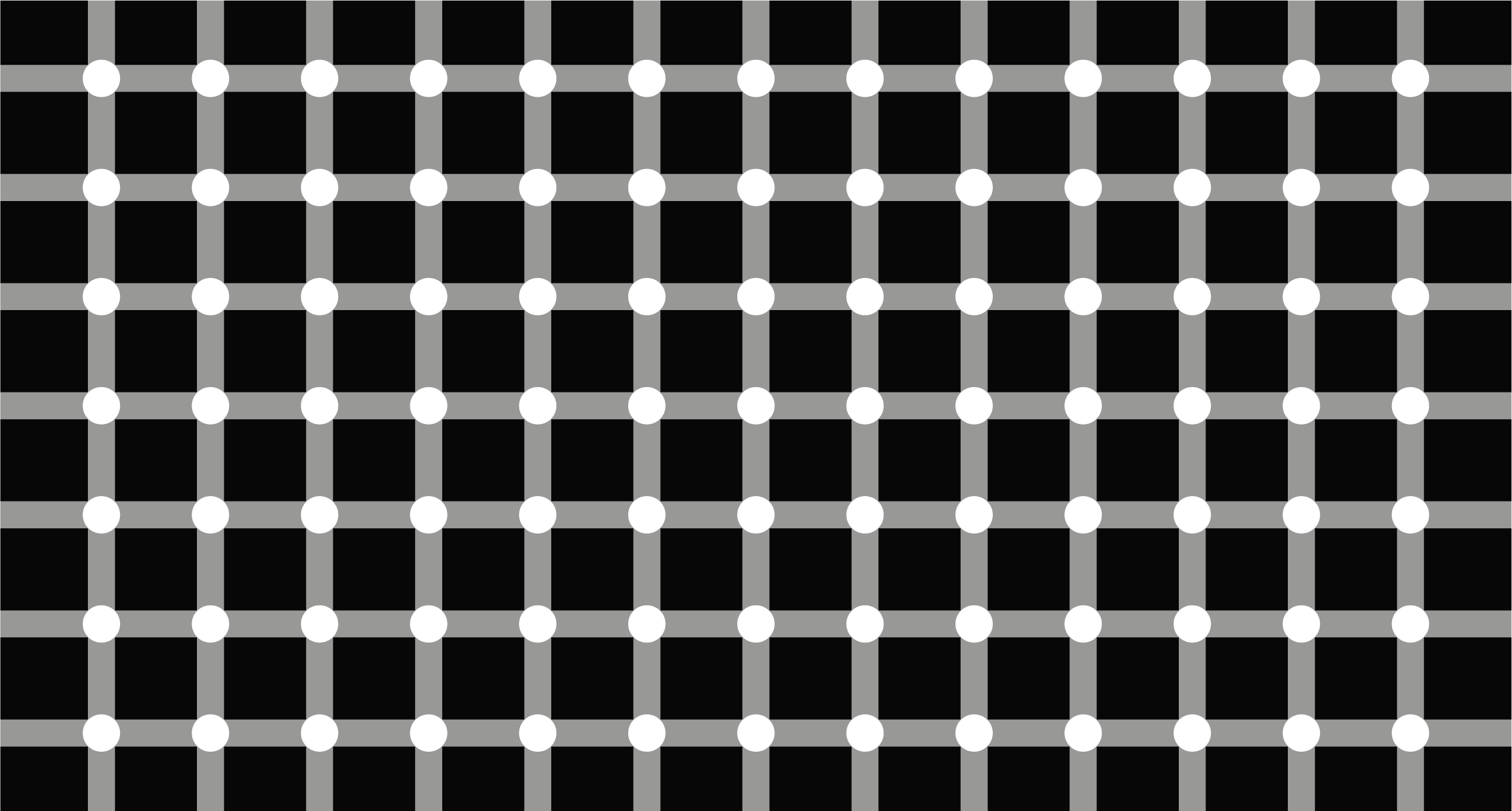 Can you count the black spots? Traffic is fast and dangerous, and often it’s fractions of a second that matters. While regulation and incentives are already in place, it’s impossible to cover any situation and keep these structures in mind all the time. Using optical illusions like this one seems to be the perfect way to nudge traffic safety on the spot. Here follows some great examples for reflection.

Traffic is fast, furious and dangerous. At the same time, for most people driving quickly becomes a practice run by habits and automatic responses. However, relying on habits means that we are sometimes surprised. On certain roads, a sudden sharp turn, kids playing and walking home from a nearby school, or well-hidden side-road causes such surprises to be systematically attached to a particular location. Handling the resulting situations are not readily done by laws that apply to the general practice, fines are too late, and descriptive information takes too long to process. Thus, we usually opt for signals – but even signals needs to be associated with content, or may be ignored, causing that fraction of a second between life and death to disappear. For this reason, aiming to influence our attention by the most direct and simple input may be an optimal strategy.

Everyone knows the most simple example of this strategy. Scaring birds to so as to avoid hitting the windows by putting up shadow images of predator birds. The bird most likely gets the immediate experience of impending danger and changes its course as a consequence. Of course, if a bird could make decisions it would still have the opportunity to hit the window. Likewise it would take little time for it to notice the fraud and learn to ignore if it were in its interest. Yet, at the time the bird would realise this, its life would have been safed. Thus, nudging by optimal illusions seems clearly to quailfy as a nudge – well, at least for humans, that is.

Watch out! Potholes ahead! Well, actually not. As you can see from the second picture these potholes are 3D fake stickers placed on the road.

Originally they circled the internet saying that these fake potholes had been placed in Canada in order to slow down drivers in an innovative attempt to combat the problem of speeding. However, as the text on the road following the stickers reveal, they we really a part of an 2007 advertisement in India for Pioneer Suspension, a vehicle suspension supplier. The ad was intended to suggest to drivers that, with Pioneer Suspension fitted to their vehicles, they would enjoy a smooth ride even on rough roads.

Is It A Nudge?

For some, this behavior change intervention would qualify as a nugde. However, there are a couple of reasons for not doing so:

In a more sympathetic attempt to slow down traffic road planners in Philadelphia have been experimenting in 2008 with painted illusions of speed bumps (1). 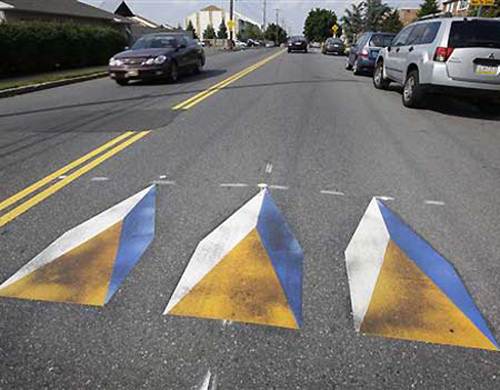 These speed bumps are perceived as identical to real speed bumps but cost substantially less ($500 vs. $2.000), does not impede water flow and poses no threat to ambulances or other speeding emergency vehicles.

Ultimately, then, we may conclude, that while this is a nudge, it is not a perfect one. It might be a good idea on roads frequently used by emergency vehicles, while real speed bumps may be preferable nearby schools (Read more here).

But perhaps the best solutions are to be found in more subtle visual illusions that we’ll never get used to and which doesn’t make us adopt hazardous safety maneuvers. As suggested by Tom Vanderbilt, the author of Traffic, the road could be narrows – a proven speed reducer – or, similarly, parking permitted on both sides of the relevant road-stretch. Most ambitiously, perhaps, the dividing line could be removed since a number of studies have shown that, in the absence of a dividing line, speed decrease. The reason for this is most likely that the dividing line works as a subtle cue to speed up, as it marks one’s “safe territory”.

A particular case in point, reported both by Tom Vanderbilt and in Richard Thaler and Cass Sunstein’s Nudge: Improving decisions about health, wealth & Happiness (2008), is the nudge by visual illusion adopted by the Chicago Department of Transportation on the curve at Oak Street on Lake Shore Drive. 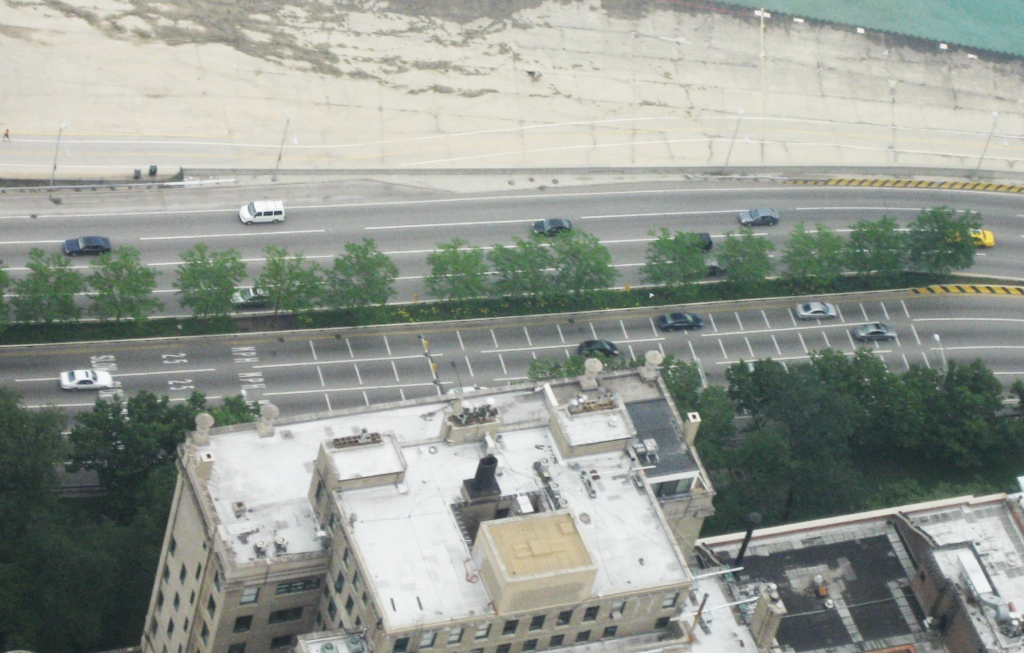 Figure 3. Aerial view of the white stripes at the lake shore drive  in Chicago.

For years the curve has been something of a crash hot-spot, although it follows typical engineering guidance for acceptable curves. At first, the Chicago Department of Transportation responded with a series of gradual alterations: making lane markings more distinct, curve warning signs bigger, and added flashing lights. Yet, driving behavior did not improve. However, the department then responded with painting a set of transverse optical bars painted in the road that shrink as the driver gets closer to the curve. As a consequence drivers are made to think they’re going faster than they really are. According to Vanderbilt this approach has been used at places like highway off-ramps, where drivers, their perceptive systems warped by highway speeds, often fail to sufficiently slow down.

Although we have been unable to dig up hard evidence, it has been reported anecdotally by the Chicago Department of Transportation that they have seen an improvement in behavior. If this turns out to be true, it provides a good example of how subtle visual illusions may improve traffic safety without leading to hazardous behavior and without loosing its effect from habituation.