Low voter turnout is a democratic problem that may be fixed with help from behavioral science. Here are a few insightful nudges that has proven to work.

Last week the elections for the European Parliament was carried out in all countries. Though some considerations exist, a strong voter turnout is generally seen as desirable. However, the turnout for this particular vote has seen a decrease across Europe in latest elections, including last week’s elections. In light of this, we thought it was worth looking a bit into voting behaviour from a behavioural perspective. 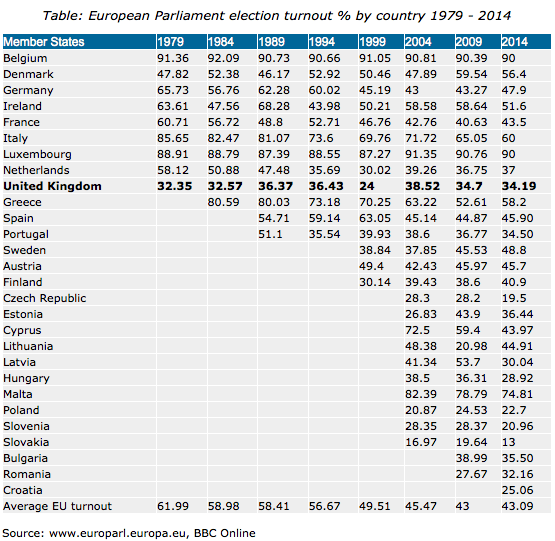 Fig. 1. The turnout for the European Parliament election

Few countries stand out in the election with high voter participation, such as Belgium that had an impressive 90,39% voter turnout for the EP election in 2009. However, voting in Belgium is compulsory and places in which this is the case – such as Cyprus, Greece and Luxembourg – voter turnout is usually very high.

Numerous factors have been proposed to explain for why the voter turnout generally is so low. One of these factors is the parliament itself and the power it represents. Compared to national elections it is easy to overlook the significance of one’s vote on the political outcomes. Margaret Thatcher famously dubbed it the Mickey-Mouse parliament, which does not exactly reflect a view of the parliament that attract voters to spend time and energy on deciding on a vote – not least actually going to the polls.

Downs (1957) and Riker and Ordershook (1970) used rational choice theory to predict that voter turnout should be near-zero.  And they seem to be right: For a rational agent, voting only yields a higher utility than non-voting, if his vote has a deciding impact on the results. Otherwise the costs in time and effort to actually vote outweigh participation without any impact.

The real world, however diverge substantially from the rational calculus governing voting behavior; citizens do vote.  Social science has pointed to some factors that affect voter turnout. These factors do not appeal to self-interested motives and may be considered nudges, if properly applied by a behavioral architect.

During the 2008 US elections, Nickerson & Rogers (pdf) conducted an experiment to test interventions to get people to the polling stations. It was implemented as part of a phone campaign and compared three tactics to a control group who was not contacted at all. In the standard group, people were reminded of the upcoming election and their duty to vote. In the self-prediction group, people were also asked if they intended to vote. The last group tested implementation intentions (II).

In short, II are simple if-then rules that are designed to make taking action easier. They follow the general formula “If I’m in situation X, I will do Y!” These can be very general (“If I feel like smoking, I’ll have a piece of gum instead”) or extremely specific (“When I get off the train on Sunday, I will go to the polling station on the way home”).

By making a mental link between situation and behavior in advance, it becomes a lot more likely that one will do as planned. It is much easier to fall prey to inertia if you have to vote “Sometime next week” than if you know you’re going to be there Sunday, 16:30 sharp. Also simply forgetting to vote is much harder if it is marked down in your daily schedule.

II are the key to the third experimental group. In addition to the standard script they were asked about the time at which they would vote, where they would be coming from and what they were doing beforehand.

It turns out that II-calls had no effect in households with more than one eligible voter. If more than one person in a home can cast a vote, voting is likely to be a social event requiring coordination. That means making plans. People in this group already had their II in place before receiving the call.

On the other hand, if only one person in a household could vote they were less likely to have II in place at the time they got the call. Among this group, the II-call produced an increase of 2 percentage points in turnout compared to the control. Adjusting for contact rates, the effect spikes at a 9.1% increase. Considering there were about 208.323.000 eligible voters in 2008, that is quite a lot.

Convenience is an important (and often underrated) factor in any choice, including elections. For instance, the distance to the ballot-box, has been shown by Gimpel & Schuknecht to significantly influence voter participation.

However, as Pelle Guldborg Hansen has argued in his recent book InfoStorms co-authored with Vincent F. Hendricks, reducing distance might not be good for the quality of democratic votes. Making things too easy, e.g. by moving ballot-boxes into high-schools and the like, is a cheap trick to raise the number of votes, while at the same time neglecting the purpose of democratic vote. People who do not really care, nor really know about the content of the votes might cast their vote, just to get things done.

But convenience must be considered in a broader perspective than costs in time. Barriers unrelated to quality are present, e.g. if voters have to actively seek out information about where and when to vote.

In an effort to boost vaccination rates for the H1N1 virus, the university of Chicago put up maps around campus, detailing where students could get vaccinated. By thus making the offer of vaccinations salient, and removing the need to search for logistic information, the campus increased vaccination rates to a point where they had to hire additional staff.

In light of this, consider how it might affect voter turnout if some of the posters for candidates were replaced with posters for polling-places.

In a 2011 study by social psychologist Christopher J. Bryan et. al., the authors of the study found that changing a simple phrase in an election survey could have dramatic effects on voter turnout.

Bryan and his team from Stanford University stumbled upon the effect when they in 2008, prior to the presidential election, sent out surveys in which they asked the recipients what seemed like more or less the same question, but with staggering differences in post survey responses. One group received a survey in which it was asked whether or not they thought it was important to vote. The other group was asked if it was important to be a voter. Bryan’s group got responses from 55.6% of the ‘important to vote group’ and 87.5% from the ‘important to be a voter’ group. 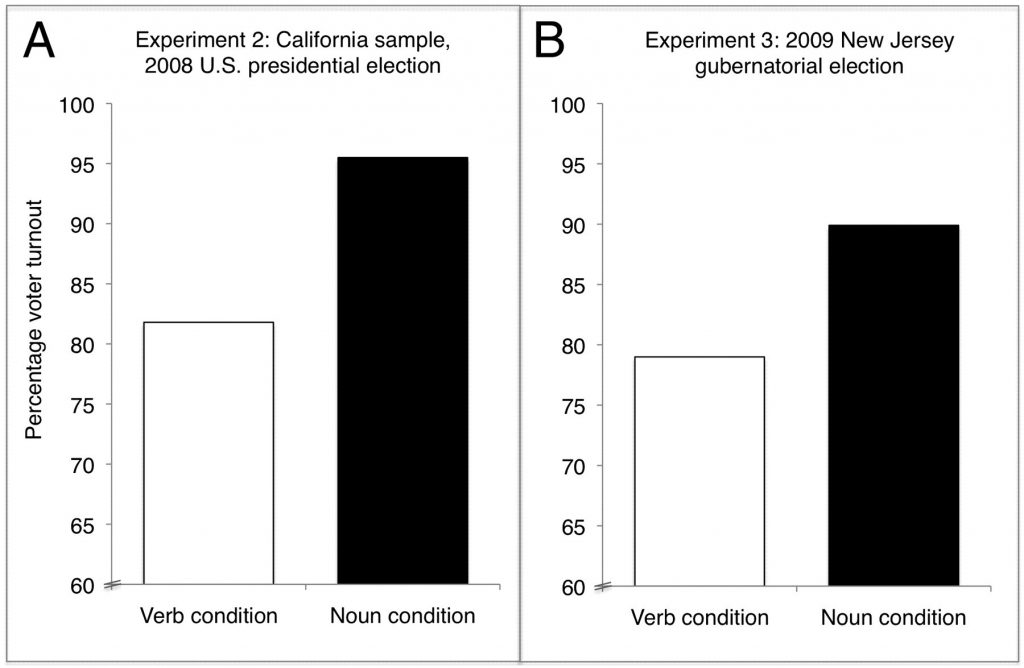 In short, Bryan suspects that the simple change in wording strikes the survey recipients at a level in which they can imagine themselves voting and this perhaps plays on how people would like to view themselves – this is called personal-identity phrasing. In respect to the recent European Parliament election, much attention has been paid to getting people to actually vote, but Bryan’s findings from 2008 (and since) suggest that appealing to identity, rather than action, can shift the behavior of a substantial amount of people.

Of the things you could say about us as a species, that we are social creatures is probably one of the most fitting. Our decisions are largely shaped by how the people around us act. Making voting a social thing, can therefore contribute to higher participation rates as well:

In the 2010 U.S. congressional election, Facebook contributed to a (very) large-scale experiment on voting behavior, testing how social media could impact voter turn-out. By reminding people that it was voting day, and informing them about which of their friends had voted, they boosted voter-participation in the election by an estimated 60.000 people, as a direct influence of the reminder, and an additional 240.000 showed up as a consequence of social contagion.