When A Nudge Becomes A Nag

When trying to nudge behavior, you have to consider who it is you are talking to. Otherwise, some nudges may easily become nags.

Nudging is increasingly being viewed as an effective policy tool to combat a range of issues like climate change and the obesity epidemic. Likewise it finds application in the promotion of other issues like sound financial planning. However, most researchers are also aware that some nudges varies in their effects depending on what segment’s context they are applied to. A specific nudge may very well have an intended effect on one segment of society, but have no or converse effects on another. For instance, political segments may create variance with regard to how a given nudge will work and how. It is therefore increasingly evident that you have to know how and why a nudge effect its audience; one-size does not necessarily fit-all [1][2].

Which Type Of Nudge?

Before we begin, we have to first understand under which circumstances political ideology may influence the effectiveness of a specific nudge. It is therefore imperative that we have some form of matrix on which we can designate and differentiate between different types of nudges. Luckily, and not least bit surprising, we have just such matrix taken from an in-house authored article named ‘Nudge and the Manipulation of Choice’ [3]. The matrix is intended to be used to differentiate between different types of nudges in order to clarify when a nudge may cross the delicate line and become manipulative. 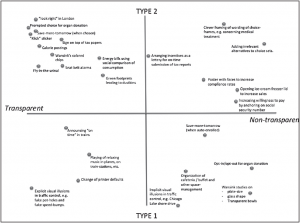 The Y-axis of the matrix differentiates between two mutually dependent, but wholly different, cognition levels. These two cognition levels are based on Dual Process Theory that asserts that the human brain, simplistically put, is reliant on two different kinds of thinking: The intuitive and automatic type 1 system and the conscious and reflective type 2 system [4]. As illustrated below a nudge can influence both modes of thinking, but in different ways.

Nudging people to slow down near dangerous curves can be achieved by adding transverse optical lines on a road and then shrinking the space between them slowly. This gives the illusion, subconsciously, that you are speeding up and subsequently results in drivers slowing down. Hence the optical nudge impacts your automatic behavior.

However, other types of nudges are less obvious or non-transparent in their motives. For example the framing of a preposition to influence your choice in one direction or another, is an excellent example of a non-transparent nudge. If a patient, for example, is told that there is a 90 pct. chance of success with a given medical procedure he/she will typically opt-in. If, however, that same patient is told that there is a 10 pct. chance of failure, then the patient will be significantly less likely to opt for the procedure. The difference is that one is presented in a positive frame and the other in a negative frame, which elicits different emotional responses. What’s more, we are typically unaware of this framing bias and therefore this nudge is non-transparent.

Whereas the first example is an apparent attempt to nudge reflective behavior, the second example is a more deceptive, since you are typically unaware of it, and therefore it is arguably a manipulative attempt to influence your choice. To get the full picture read ‘Nudge and the Manipulation of Choice’ here.

From Nudge To Nag

However, for the purposes of this post the subdividing of nudges into different categories serves another purpose entirely. Namely it makes it possible to discern when personal characteristics, like political ideology, may impact the effectiveness of a given nudge.

At the moment clearest evidence there exists regarding the impact of ideology on the relative impact of nudging comes from Costa & Kahn’s report on ‘Energy Conservation “Nudges” and Environmentalist Ideology’. Here they discovered that although ‘green nudges’ (like the social comparison of electricity consumption) work well on liberal Americans they conversely backfired on conservative ones. This is illustrated in the results as while liberal neighborhoods reduced their energy consumption by 3 pct. in response to the green nudge, republican households either saw no movement in their energy consumption or at worst an increase of 1 pct. Highlighting how the application of nudges at times need to be tailored to the audience as “what works on average in California county may not work on average in Lubbock, Texas.” [1].

This suggests that when dealing with transparent type 2 (reflectively) based nudges there is an evident possibility that nudges need to be tailored to the specific individual. This also intuitively makes sense, since green nudges are actively trying to impact your reflective behavior; hence activating a reflective behavioral change should appeal to that specific individual. If you care little for the environment, why should an electricity bill comparing your consumption with others inspire you to change? In fact why are they even bothering you with this information? The nudge quickly becomes a nag and either elicits no behavior change or even worse a defiant converse reaction (i.e. increasing your energy consumption).

When seeking to nudge reflective behavior Costa & Kahn have illustrated that ideology plays a key role in the successful utilization of nudging. Hence nudges, especially ones attempting a reflective behavior change, may need to be tailored to the specific household. What’s more lessons from other countries can only be seen as indicative of the potential success of the type of nudges in question. When applying nudges we need to consider both which group the nudge is aimed, but also the more general circumstances in which the nudge is situated; without such considerations a nudge may very well fail, not because it does not work, but because it is misapplied.

This all leaves many unanswered questions about how messages should specifically be tailored towards household ideology or whether other personal characteristics (like social background, education etc.) impact the effectiveness of a given nudge. However, on thing is clear. The nudge-approach to behavior change often needs to be targeted to make use of its full potential. In turn this implies that nudging may prove even more effective than previously thought.